What Would Arthur Do? ( How to Reinvent Yourself and More)

There’s a bench in Central Park with a small plaque on it that reads: “Arthur J. Krakower. 1921-2009. Still Inspiring.” Arthur was my father and not a day goes by without thinking of him and asking myself, “What would Arthur do?”

My father reinvented himself three separate times and each of his careers was impressive and successful in different ways. The common thread throughout was how he continually defied the odds.

He grew up in the Bronx in a home with a single mother and modest means. He was always a voracious reader and fell in love with art, design and classic literature. When he graduated from NYU, he was determined to enter Macy’s executive training program, which was known for only accepting Ivy Leaguers.

That didn’t stop my dad. He was able to win over the human resource person by challenging him in a discussion of the Greek Classics. Although this was hardly a prerequisite for working as a department store merchant, what they saw in him was an innate intelligence, contagious enthusiasm and endless determination that would come to define his very being.

Not surprisingly, he quickly rose within the organization and after many years, became a top executive at Macy’s West. For numerous reasons (worthy of a future post), he retired from Macy’s at 65. Arthur, however, wasn’t ready to ride off into the sunset just yet. It was time to reinvent himself.

For his second act, his passion drove him to pursue a career in commercial real estate. While working at Macy’s, he had become extremely knowledgeable about the inner workings of shopping malls and went on to become a very successful broker. Every year, my dad would be recognized as one of the top realtors at Coldwell Banker and he loved it. It kept him young. But there was still more to come.

“I kept doing things while I was working until finally I decided I had to learn more, had to do more,” he told a local newspaper in 2009. “I wanted to see how far I could go.”

When my dad turned 80, he received his MFA from the California College of the Arts. He’s still the oldest graduate from the program, and let me tell you, it was pretty amazing watching him walk down the aisle in a cap and gown.

He approached getting his masters in fine art with the same unbridled passion and enthusiasm that was born in the Bronx, and many of his paintings depict memories of his childhood in New York City. His art hangs in homes all around the world including mine.

They say the apple doesn’t fall far from the tree and I’m honored to say there are many similarities between my father and myself. I also began my career as a merchandiser and my second act was in a new kind of commercial real estate–the internet, where I founded One Kings Lane. Now I’m about to launch a new business–In the Groove, a lifestyle destination and community for age-defying women–which, in its way, is my creative venture that’s filling me with the kind of excitement and joy that Arthur must have felt when approaching a new canvas.

“What would Arthur do?” has been my compass throughout my career and I hold those insights close to my heart, but I’d like to share a few of the things I picked up from him:

1) Never stop learning. Like they say, if you don’t use it, you lose it. Do whatever you need to do to stay relevant.

2) Lead by example. Be the first in the office and the last to leave. That old school work ethic is contagious and more often than not leads to success. Arthur would’ve loved working in the digital age.

3) Embrace change. New challenges are the secret sauce to a successful career. If you don’t like what you’re doing, change the way you’re doing it or at least the way you think about it. Most people don’t necessarily look forward to change, but it’s really the best way to grow.

4) Be happy. Happiness, I’ve come to learn, is being who you are, doing what inspires you and sharing it with the people you love. That’s what Arthur did and I’m proud to be his daughter, following in his footsteps. 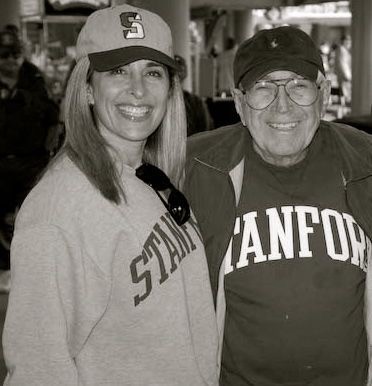 @Nordstrom Beauty has the best gifts under $100. L

It’s All About The Sequins And Glitter 🖤 I kn