The Slingback Is Back – And These 30...
Heat Wave Or Hot Flash? Your Guide To...
BeautyPie x Jenna Lyons Made The 5 Perfect...
Brochu Walker Is Your New Favorite Brand
30 Ballet Flats That Prove They’re The Shoe...
Swarovksi’s New Collection Is The Accessory Of The...
Editor Essentials: The Pieces We Can’t Live Without
The Summer Sneakers We’re Kicking Around In
The Only Sandals You Need This Summer
White Shirts, Blue Jeans: A Match Made In...
Wellness

Or how I accepted and fine-tuned my hearing loss.
by Susie Finesman October 22, 2018

More than five years ago when I was fiftysomething, I chaperoned a young tutee to the hospital for some serious hearing tests. While trying to assure him, I agreed to a mini-hearing test of my own, which resulted in the audiologist’s suggestion that I see the doctor about getting some hearing aids. “I can’t possibly wear hearing aids and be on OK Cupid at the same time,” I quipped, to which she responded” you may think that hearing aids age you but what really ages you is saying “what” all the time.” Wow, that hit close to home but I’m a stubborn person, driven by vanity and the notion that even though my passport says otherwise, I am still quite young for hearing aids.

Cut to last spring, when my grown children and significant other staged a mini-intervention to discuss the fact that I was indeed saying “what” all the damn time and it was making them crazy. To say I wasn’t “pleased” underestimates the seismic quality of my reaction as I tried to spin my failings into their faults. “Stop mumbling, don’t insult each other so quickly and please stop calling to me from another room.”  I quickly shut them down and kept shutting them down because I did not want to face the facts—my hearing in noisy places was terrible and my hearing in the best of circumstance was mediocre. I spent a year singing out loudly “I can’t hear you!”

It wasn’t until a few weeks ago, while doing research for this story, it was pointed out to me that I was probably reading lips and coasting through my fairly successful life missing a good deal of what was being said while exhausting myself trying to catch up to the conversation (Could this explain why I like my own jokes so much?)

I had my hearing re-tested and this time, I wasn’t surprised by the results.  The loss was labeled “mild to moderate” and the prognosis, once again, is that I was a prime candidate for hearing aids. Same message, only this time I was a bit more open to investigating possible relief. It seems that many millions of people are in the same audio-boat and all of us would benefit from some hearing enlightenment.

Recent data suggests that while at least 10% of the population self-reports some degree of hearing loss, only about 3% actually wear hearing aids. The World Health Organization estimates that 5% of the population suffers from serious hearing loss.  AARP recently published a graph that shows: 29% of people in their 50’s and 45% of people in the 60’s suffer hearing loss. Age is the greatest predictor of loss and in the largest group studied, ages 20 – 69; men are twice as likely to be impaired. (Fair? We get night sweats they get deaf.) Hearing loss is the third largest ailment in the United States behind heart disease and arthritis and none of these facts made me feel any better about the idea that I was a member of this lucky club.

The business of hearing aids isn’t unlike the business of cosmetics; there are loads of brands but most of the good ones are owned and operated by just a handful of corporations known in the industry as “The Big Six”. These companies keep the technology moving forward, ever making the devices smaller, and more functional. They also keep the costs high as the price of entry for a good multi-channel device is no less than $2000, and as much as $3800 per device , and newsflash–the aids work best when you wear two of them.

Then I stumbled on EARGO, a well-funded tech startup with a mission: they want to disrupt the industry in the same way Warby Parker is upsetting the market for eyeglasses: high style and functionality with a much lower price ($1950. – $2450. for a pair.) The Eargo vision appealed to me: they are slick, easy to use and almost undetectable as they rest inside my ear, and they sent me a pair to try (I love them for that.)

Most states have laws requiring a trial period for hearing aids so you can try any brand and return them (hello shoppers) and with one quiet click, the shiny new Eargos arrived at my door.

I doubt the customer experience is quite as nurturing as having your own personal Audiologist on call and ready to meet for adjustments but the packaging is super sleek, they arrive ready to use and they have very experienced techs online to help with any fine-tuning. I scheduled a video call with Manny Ocano, Director of Clinical Support, and a passionate hearing technologist. I stuck my ear right up to the camera on my laptop and Manny assured me that I was using the Eargo properly. He talked me through the terms of natural directionality and energy frequencies (call me for details,) and he added that “hearing aids are like the game Wheel of Fortune, they give you more letters to solve the puzzle and follow the conversation.” He even offered to re-program one of the channels to give me an assist with filtering out some unwanted background noise.

I have been adapting to the Eargo for two weeks now. The sounds that I haven’t heard in years like paper rustling is kind of cool but the sound of my own voice is unsettling. Manny says that as the brain adjusts to hearing these noises, this will subside and it is, but slowly. I find that sometimes they tickle my ears, and like kicking off my shoes, I remove them often. “Empty” ears just feel more natural, but maybe that will change as I am bound to lose these fancy little earmajigs.

A conference call where the smart young ones talk too fast is still a struggle – because people still –talk too fast. It is important to remember that hearing aids are not a cure they are merely an aid—an expensive one that requires a bit of training.

The kids came for dinner and applauded my bravery. I went out to dinner and showed them off. Every one thinks they are kind of “groovy.” 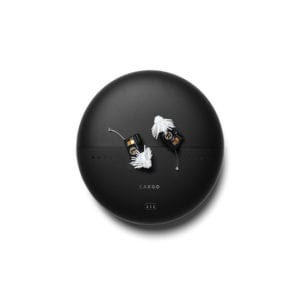 Heat Wave Or Hot Flash? Your Guide To...

Phenology Is Changing The Way We Talk About...

The Vagina Doctor Is In, And She Wants...

Organized, Fit, and Active: The Products To Get...

A Bath Is The Best Self-Care Ritual This...

Innovo Wants To Help You Do Perfect Kegels

The Menopause Registry Is Here For You

The 2021 Menopause Registry Is Here