The Cozy Gift Guide
The Personalized Gift Guide
What The In The Groove Editors Want This...
What I’m Loving For December
The Only Winter Coats Edit You’ll Need This...
Fleece Is High Fashion Now, and These 30...
Get the Look: A New Kind Winter White
What I’m Wearing For Thanksgiving
Brand Spotlight: Herman Miller
Why Sweater Coats Are Your Closet’s Triple Threat
In ConversationLifestyle

Nancy Meyers on Being A Grandmother and Her Latest Project

Nancy Meyers made all your favorite movies.
by Susan Feldman February 21, 2019

Nancy Meyers needs no introduction, but it’s so incredible to see her accomplishments laid out that we couldn’t resist. The trailblazing writer/director/producer makes smart, sophisticated comedies that approach men, women, and modern love in an instantly recognizable way. As a writer/producer, her first film was “Private Benjamin” followed by “Irreconcilable Differences”, “Baby Boom”, “Father of the Bride” and “Father of the Bride Part II”.

From there, she began directing her films starting with “The Parent Trap”, followed by “What Women Want”, “Something’s Gotta Give”, “The Holiday”, “It’s Complicated”, and “The Intern”. Most recently she worked with her daughter, Hallie Meyers-Shyer, to produce Meyers-Shyer’s directorial debut “Home Again”. Basically, you can thank Nancy Meyers for making all your favorite movies. In a male-dominated world like filmmaking, Nancy Meyers is at the top of her game. And that is worth celebrating. We’re thrilled that she dropped by for Lunch At In The Groove.

Name, Age, where do you live?

Tell us about what you are doing now.

I’m adding on to my house.  (So much for downsizing.) Spending time with my little grandsons.  Thinking about what’s next.

I was always interested in theater and show business in general. Sort of drawn to it. Even as a little kid. Once I moved to LA, my goals evolved and became more clear. In my mid- twenties I worked for a producer as a story editor – working with writers on their scripts.  I knew then that I wanted to be on the other side of the desk. I wanted to write.  And once I started writing, I didn’t want to give up my material, so I became a producer and once my kids were old enough, I began to direct my films. I was a late bloomer for a director. I didn’t direct my first film until I was 48.

You are one of the most distinctive filmmakers. What or Who are some of your biggest influences?

Thank you.  So many films and filmmakers have influenced me and continue to influence me but I’ve always been partial to the screwball comedies of the 30’s – they had great dialogue, independent, strong, witty women and great romances with real leading men.  And of course the films of the late ‘60’s and ‘70’s were incredibly influential.  These were the films I watched as I became a young woman and they influenced our entire culture – including me.

Ok, so let’s say you have an idea for your next movie. ( Do you?) What’s your process?

My process is a slow and deliberate one. I think a great deal about an idea before putting pen to paper (or fingers on the keyboard).  Once I think I have enough of an idea I begin an outline, do character studies, try out some dialogue… this can go on for 4 months or so and then I shape it, work on it some more then begin to write.  That generally takes another 4-6 months.

Well, the best part is when it all finally comes together and the actors are in hair and make up and wardrobe, the sets are built, the lights are on — no more meetings, no more planning – we get to make the thing.  The worst part for me are the long hours, the pressure and the worry.

Your aesthetic is very specific. Your characters’ fashion is a shining example of this. Is it reflective of how you dress everyday? Did you know there’s a trend called ‘menocore’ that’s all about young women “basically dressing like a Nancy Meyers movie”?

I read something about that, I think it’s just about dressing comfortably in a non-showy way.  Being comfortable not only in your own skin but in the clothes you wear.  Not trying to look young – but still looking good.  This comes with age.  I’m glad younger women see the value in this. And yes, this is how I dress.

I read that you once had a cheesecake business to help support yourself while you pursued writing full-time. Can I get the recipe?

It’s a family secret but I’ll make you one.

You’re great on Instagram – how have you taken to social media?

I’m great on Instagram?  Why thank you!  My first instagrams were on THE INTERN, because the studio asked me to do it, but then it’s evolved into other areas – politics, other filmmakers, performers, memorabilia. I don’t like to get too personal, I don’t really show myself or my family too often. I like instagram but lately I’m feeling a little over it. But still, it’s very bespoke and often amusing.

Your aesthetic and brand is so beloved – I don’t know anyone who hasn’t had a Nancy Meyers kitchen/house/vacation fantasy. How do you approach design in your movies?

I approach the sets as I do casting, wardrobe or any other part of the process. It’s about what tells the story best. Most of my films take place in the lead characters’ home or workplace so I try to make that environment true to the character I’ve written. It’s her vision as much as mine.  And I can’t help it if some of my female characters and I share the same aesthetic.  But I promise you it’s all about character.

Which one of your movies was the most fun to make and why?

The most fun film to make was Father of the Bride Part II.  I loved the actors, we all knew each other very well when we returned to make the sequel to FOTB.  We were all so happy with the reaction to the first film and genuinely really all liked each other  so we all embraced the chance to make a second film together.  And let’s face it – Steve Martin, Martin Short and Diane Keaton are very fun people to hang out with for a few months.

You’re known for making movies that showcase the rich inner lives of older women. Do you feel like you’ve helped change the conversation around aging?

I’ve made two films where the leading lady was over 50 and I think Something’s Gotta Give may have been the first time we saw a woman that age fall in love and be a viable love interest for a rogueish older bachelor.  In my mind it was really the first time either one of them really fell in love so that was an interesting story for me to tell since they were older.  I was really writing someone very close to my own age, so I never thought of her as “older” I just thought of her as a complex person who’s lived a life, raised a family, built a career, and finds herself falling in love and getting hurt when she thought she had life figured out. It turns out it was a relatable story… but personal films so often are. And did I change the conversation?  I’m not sure, but maybe I opened a door a bit for other films starring women over 50 who had a lot of life left in them.

Your daughter recently wrote and directed her first movie, Home Again, which you produced.  What was that like?

It was kind of an amazing experience for me. I was so proud of her script and the wonderful actors that were attracted to her material and wanted to be in her film. I loved being there for her and producing the film.  It was fantastic to watch my daughter direct and see how much she knew about filmmaking and we all like to have someone on set we can turn to and say, What do you think?  I don’t know anyone who directs who doesn’t need that and I was happy to be that person for her.

Speaking of family how do you find being a grandmother?

Have you learned anything new about yourself?

That’s a good question.  I haven’t played with little kids since my daughters were that young so just having fun with little kids again is so joyful.  I may have forgotten what that felt like and also let’s face it – your baby’s babies touch a very deep part inside of you. A deeper place than you realized – maybe it’s a place inside of you that’s been saved just for them – waiting to open.  I feel so lucky when I’m with them. I really do.  Sometimes I just look at those boys and want to cry. They literally mean the world to me.

What do your grandsons call you?

I ask them to call me The Best Grandmother in the World but they call me Nanny.

Do you have any family traditions? Whenever one of us is traveling, we always text the others when we land and say “She landed George”.  (a line from Father of the Bride).

Do you have any seasonal traditions? Summer? Holidays?

We love to all travel together.  My family is growing so honestly it keeps getting better.  I love to rent a house more than stay in a hotel… we’ve been doing more of that lately.

If you could have one superpower what would it be?

I don’t know if this is a legit super power , but I’d love to be able to time travel… but only to the past. How brilliant would that be?

If you had a warning label what would it say?

Caution: Will give honest opinion.

The Woman Who’s Changing Haircare As You Know... 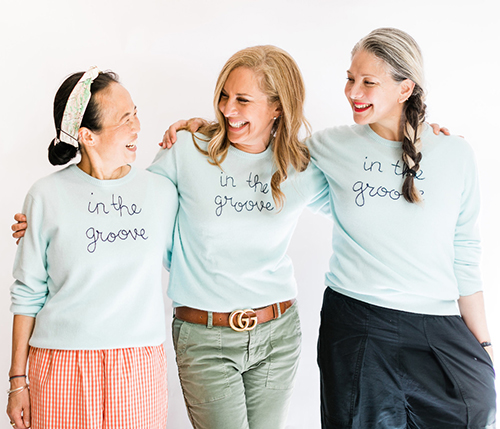