The Investment Pieces That Are Worth Every Penny
The Best Books To Curl Up With This...
My Favorite Self Care Ritual Is The Avoila...
Editor Essentials: The Only Black Pants You’ll Ever...
30 Pairs of Cute Winter Boots To Keep...
Meaningful Beauty Wants You To Have Your Best...
The Valentine’s Day 2023 Gift Guide Is Here
The Retro Sneakers Trend We Can’t Get Enough...
The Self-Care Rituals We’re Practicing To Kick Off...
Shirts and Jeans That Step Up Your Daily...
AgingAnti-AgingBeautySkincare

Top OB/GYN spills the beans on her own facial tightening procedure. Wow!
by Susie Finesman January 7, 2019

Dr. Suzanne Gilberg-Lenz is our friend. She is also a brilliant OB/GYN who has helped In the Groove report on issues from menopause to vaginal lasers. Her approach to medicine is Eastern/ Western and really down to earth practical. She translates difficult medical jargon from “English into English” and we love her for that.

A few of us met recently for dinner and were taken aback by how fantastic she looked. Now, usually we see her in those adorable soylent green scrubs but this sort of fantastic was more than the effect of an upmarket white suit and dangly earrings. We let our fearless leader, Susan Feldman lead the charge for truth and asked Dr. Suzanne to spill the beans.   She was happy to share it all, her research, her doctor and her before and after photos. This brave beloved woman of science decided to be totally transparent and make her own statement to end what she calls “compare and despair!”

Suzanne didn’t have an “aha my face is falling moment,” rather she had a lifetime of self-consciousness about her  double chin and neck. This unusually confident woman described moments when bending over to examine a patient, thinking, irrationally we hope, they must be staring at her neck.  As often happens with wiser women, we allow life-changing experiences to actually change us. In Suzanne’s case, it was surviving a divorce, a bout of breast cancer and a commitment to losing 15 pounds and going back to the gym that spoke to her heart and said  “you’ll never be healthier or younger, now is the time.”

Suzanne is in her mid-fifties and was raised in Beverly Hills, so she is geographically pre-disposed to hearing alot about plastic surgery. She even considered having a lower face-lift during her breast cancer surgery, but chickened out. The thought of all those sutures and the long recovery when she had teenagers to parent and so many babies to deliver was impractical. She didn’t want to look different; she just wanted less, less chin and less skin.

Dr. John Layke, a friend of Suzanne’s (she delivered his babies) suggested FaceTite coupled with RFAL Lipolysis, a procedure he calls “one third of a face lift that shows approximately a 35% improvement over the course of 6 – 12 months.” Face Tite is a minimally-invasive procedure that delivers the same results of a mini face lift without surgery, stitches or scarring.

Because Suzanne uses RF lasers in her own practice, she understood and is completely comfortable with the science.  The procedure begins with tiny incisions in the lower face, where radio frequency needles are inserted sub-dermally. The lasers melt the fat and small canuala liposuction needles are then used to remove the liquefied fat. Sedation is recommended and the entire procedure takes less than an hour. Suzanne was sent home wearing a traditional facelift compression bandage around her head for a week, and then at night for two weeks following. Compression and icing for the swelling is key and as we can see from the pictures, the bruising and swelling subsided after one week.

Ongoing improvement with face tightening is achieved much in the same way a micro needling facial works, only deeper and  from the inside out. The skin’s natural healing response to the havoc and damage of the lasers is to produce collagen–the cellular compound that makes up a good bit of our skin –even scar tissue.

Dr. Layke has had amazing results with the procedure but likes to be reasonable about what can be achieved. He says: “Face Tite is not a traditional lift –there isn’t any pulling or sutures to hold up the facial structure, but it will reverse the clock 4-5 years by removing fat and encouraging collagen to do its’ part.” He also recommends a little tailoring of the neck muscles by using 24-32 units of Botox a few times a year to soften those horizontal bands of the neck. Suzanne felt fantastic the minute the bandage came off and calls Dr. Layke every month to say “I didn’t think this could look any better, yet each month, I see the tightening and lifting effect and I’m thrilled!”  Of course costs vary radically , but the procedure with a top doc will probably cost 7-10k and sounds so much less scary than the part where they peel your face off your face. If Suzanne is any indication, we think the idea of keeping her face “ in situ” and just saying goodbye to a bit of the extra stuff was a great one. 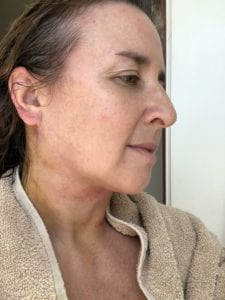 My Favorite Self Care Ritual Is The Avoila...

Meaningful Beauty Wants You To Have Your Best...

The Self-Care Rituals We’re Practicing To Kick Off...

The At-Home Skincare Devices For Your Best Skin...

The Investment Pieces That Are Worth Every Penny:

Have you tried this latest trend? It’s humbling!

Just found my new favorite sweatpants… and they